The Possum Posse Rides Through Nashville 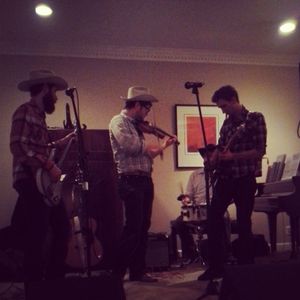 Austin-based musical sensation The Possum Posse stopped in Nashville, TN to play some shows, visit studios and tour the town on their way to Nashville, IN to play a fundraiser for the Morel Mushroom Festival (yes, that's a real thing). The band is best known for their epic YouTube video series Guy on a Buffalo, which has a whopping 15 million hits.

The band played an intimate house concert on Thursday night, winning the audience over with their slightly irreverent, quirky songs and engaging storytelling. At one point, a statue of Jesus was moved to avoid falling during the foot-stompin' bluegrass-flavored set. After all, they may have songs like "Battered Husband Blues" but they are actually quite respectable folk. 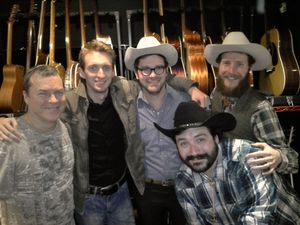 On Friday, they stopped by two busy Nashville studios to meet with some of
Nashville's top engineers and session players, including John Willis (guitar session player for Taylor Swift, Kenny Chesney, Willie Nelson, Alabama and many more) and Brian Kolb (Grammy-nominated engineer, songwriter and producer).

Friday evening found them at Nashville's popular Soulshine Pizza, playing to a packed house and selling and signing merch from a saxophone case.

The band had this to say, collectively, about their Nashville trip, "We felt very welcomed in Nashville and made some great connections. It was inspiring to be around such a talented community, and we can't wait to come back!"