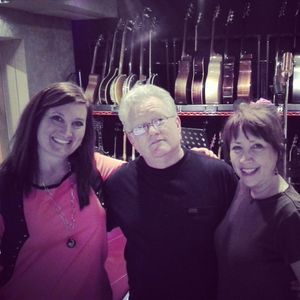 The Vocal Team: Me with Thom Flora and Judy Rodman

When I asked John Willis (producer) and Judy Rodman (vocal producer) who we should have sing male background vocals on my new record, they both looked at each other and said in unison, "Thom Flora."

After meeting Thom, and hearing his voice, I can certainly understand why!

On the first tune, Thom was singing a little bit with the track to get the vibe. His voice, while great, wasn't the same color as mine. Thom was initially singing high-styling glittery vocal lines, common in three-part country harmony, but it just didn't match my lower alto tones. Thom stopped after three lines, and said, "Nope, that's not right. Her voice is deeper than that. I've got to get into something different here."

Then Thom proceeded to shift his voice to a tone that exactly matched mine---and it sounded like we had been singing together for years! It was so amazing to watch him at work, doing what he does best.

And, after thinking about it, I guess I shouldn't have been too surprised. A true professional singer, Thom has sung with artists like George Strait, Kenny Rogers, Toby Keith, Trisha Yearwood, Vince Gill and dozens of other top artists. When I told him my record was similar to Shawn Colvin, he said simply, "I've sung with her."

I can't wait for you to hear what Thom did to add sparkle to the songs on my new record! Until then, here's a little clip of him to enjoy from the studio.