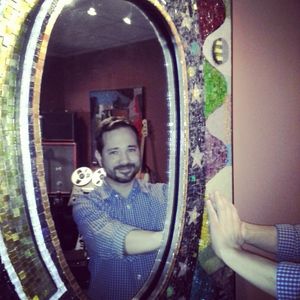 Dave Brainard was nominated for a Grammy for producing the Brandy Clark album12 Stories. I recently caught up with Dave and was lucky enough to hear the behind-the-scenes scoop about recording two of the songs on the record, “Stripes” and “Hungover.”

“Brandy and management didn’t necessarily want to cut ‘Stripes’,” said Dave. “She loved the song but said that it didn’t really fit her as an artist. In the pre-production meeting, I fought for it, and asked the team to trust me on it.”

In Dave’s mind, he heard the production to be more of a Rockabilly style, and he promised Brandy and her management that it would be their favorite song by the time the record was done.

Dave said that in looking at the project overall, one of the things made the collection of songs so great was how they worked together so well thematically. To Dave “Stripes” would be the contrast so that the collection could be even more effective.

“At one point, to demonstrate to Brandy what I meant, I stood in front of one of the mosaic mirrors in my studio (a masterpiece by his good friend John Goodwin) and covered up a bright orange section of glass. I asked Brandy what she thought of the mosaic. She said it was beautiful and that she’d always loved it,” Dave recalls, as shown in the photo above. “Then I removed my hands to reveal the bright orange color, and the rest of the mosaic came to life! I asked Brandy again what she though of it and she said ‘wow, it’s a whole different piece.’ Then I told her that the record was like the mosaic, and that ‘Stripes’ was that bright orange section of glass.”

Dave even took creativity to a whole new level in the recording of “Stripes.” 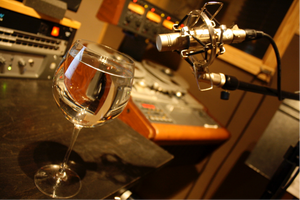 “There’s some really cool things about how we approached the production of that track,” explained Dave. “For one, we recruited Brandy’s manager to bring in her Smith and Wesson, and I stereo miked it, recording all the different sounds a gun could make. Then I edited all those sounds into a loop that complimented the drum track. Brandy said it reminded her of how they used the typewriter in Dolly Pardon’s “Nine to Five.” 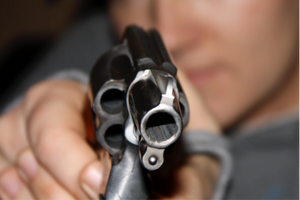 Brandy Clark posing with her Smith and Wesson

But Dave didn’t stop there.

“Another unique element in that track is me playing wine glasses with my finger to create the haunting pad that sneaks in during the intro and verses,” he said. “It’s actually ten tracks of a crystal wine glass that I tuned by pouring different amounts of water into. It was pretty effective in creating a unique soundscape for that song.”

“Stripes” ended up being the first single and the real ‘tip of the spear’ for Brandy. It even ended up on a Superbowl commercial for Beats Music, featuring Ellen. If you listen close, you’ll also hear Kacey Musgraves singing background vocals.

Another favorite production of Dave’s became “Hung Over.”

“The initial demo was a little more songwriter-y and straight ahead,” he said. “I played it for my wife and she exclaimed that every woman in the world could relate to that song…. especially her!!  At first I thought it was funny, but then it hit me: this song is an anthem for women! And in my head I had a vision of Brandy playing Neyland Stadium with 100,000 lighters in the air and the whole crowd singing along.”

Dave pitched the idea to Brandy to use a rock anthem beat and she was onboard with it. They would go with a “We Will Rock You” type of backbeat for the song.

“I feel like this was an instance where the production effected the overall message of the lyric,” said Dave. “The anthem approach leaves the listener feeling a little more hopeful and empowered, where the song on it’s own might’ve ended on a sad note.”

I left the laundry, those broken dishes
Called my sister and bought a ticket
I got a good start on startin' over
All while you were hungover

“When I’m working on an album I like for each song to become it’s own little vignette, and my goal is to sequence those in a way that the album becomes a mini movie for the listener,” Dave added. “On Brandy’s record, we took chances on the arrangements without chasing a market. We just tried our best to make it what it needed to be for Brandy, while having a whole lot of fun in the process. At the end of the day, it’s a real honor to be part of such a great record.”

To find out more about Dave and his career, click here. 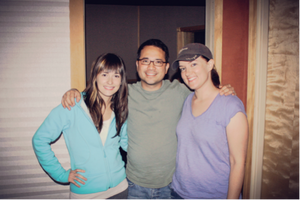 Kacy Musgraves, Dave and Brandy in the Studio