What Happens After Berklee?

Recently, I had the opportunity to interview a friend of mine who is a film composer in LA, Jeremy (Jezza) Borum, for Berklee College of Music's alumni blog. The following is a re-posting of the blog on Berklee Blogs.

After graduation from Berklee, a new kind of journey begins as alumni face the challenge of building their careers in a competitive and evolving music industry. Jeremy Borum '05 is an example of one alumni using his creativity both in music and in business to carve a path to success in Los Angeles.

After graduating from Berklee in Film Composition, Jeremy (aka Jezza) Borum settled back in his home state of California to pursue his passion of film scoring.

"After moving to LA I got a gig doing music editing for a couple network TV shows almost immediately, but my main goal in the beginning was to build film credits and relationships," said Jeremy. "I was not opposed to working on projects for little or no money just to build my resume and to forge strong relationships in the film industry. At any stage of your career, I think building relationships should be a constant focus." 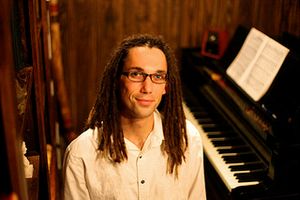 Jeremy credits his Berklee classes for giving him a sense that music is 'an industry and not just an art,' something that he did not gain earlier in conservatory environments (he studied classical music at the University of California Davis and the Australian National University).

As Jeremy's list of composer credits grew, in addition to independent and foreign films he began working on films like Ridley Scott's "American Gangster" and Scott Derrickson's "The Day The Earth Stood Still." He collaborated with composers such as Alan Menken and Stewart Copeland, working with major orchestras on several continents.

From 2007 until 2009 he toured worldwide as the keyboard player of Christafari, an internationally recognized reggae band, exposing him further to aspects of the music business and ultimately reaffirming his desire to work in film. He also started to work more as a producer and his latest album project with Mark Abel was released in April 2012 on Delos Records.

In 2009 he helped launch ZMX Music, a company that creates sheet music products for non-mainstream artists, as a master engraver and arranger. This music-related side business provides an additional stream of steady work to augment slower periods in the film and TV industry.

Jeremy plans to continue to work with the team at ZMX to build their services and client community in the coming years. He currently studies classical piano at the prestigious Colburn School, taking time away from working on the business of music to focus on developing his artistic voice as a film scorer. He is also considering a book about film scoring in the independent film industry.

"The music industry isn't well defined with a clearly defined ladder of success," said Jeremy. "It's more like a wide and tall rope ladder and you can step sideways as well as up. It's both empowering and scary at the same time to choose your own career path."

To learn more about Jeremy, visit his website at www.jeremyborum.com.