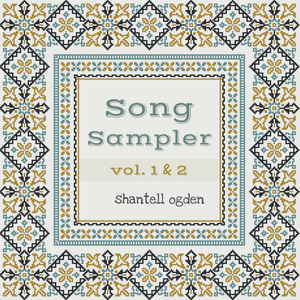 SAUSALITO, CA (June 22, 2020) —Nashville-based Shantell Ogden's highly anticipated sixth studio album, Song Sampler vol. 1 & 2, is now available. It’s a seven-song collection that follows on the heels of the highly successful Road That Drives Me, which was named Americana Album of the Year by the International Music and Entertainment Association (IMEA).

The first single from Song Sampler vol. 1 & 2, "Love On The Fast Track", is currently at #8 on the European Hotdisc Top 40 charts.

The album can be purchased or streamed at: https://smarturl.it/shantell

"There are few artists that release output with the consistency of Shantell Ogden. "Outrun My Faith” has one of the most infectious uptempo choruses you'll come across all year.” says Chris Farlie of w21Music.

"Shantell Ogden ticks every box we have here at RMHQ, not least her distinctive and rather lovely voice; but the way she weaves magic into the construction of her songs, of which no two ever sound the same…” adds Alan Harrison of Rocking Magpie.

Shantell will kick off a mini tour this summer beginning in July:

“We are excited to have Shantell performing in her hometown,” said Kevin Arrington, director, Sevier Valley Center. “Live music is such an important part of our community, and we're looking forward to welcoming everyone back to our venue for a concert by this talented singer/songwriter.”

For more information about Shantell visit:

Born in Utah, Ogden brings the work ethic she learned growing up on a farm to her life as an independent performing artist. Having toured nationally and in the UK and Ireland, her music has been praised by notable media including Performer Magazine, No Depression, and Maverick Magazine.

Since the release of her fifth album in 2016, Shantell has enjoyed extensive media appearances including Coffee, Country & Cody on Nashville’s WSM - the home of the Grand Ole Opry -Today in Nashville (WSMV) and Good Day Utah (Fox). In addition, she has appeared at high profile festivals including Americana Festand Tin Pan South. Praised for her work with awards including Songwriter of the Year in 2018 International Music and Entertainment Association (IMEA) Awards, Shantell Ogden is truly an artist on the rise.