Featured in "Write Away" Magazine in the UK 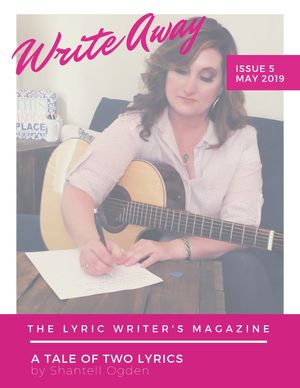 A Tale of Two Lyrics

Songwriting is a choose your own adventure process that exposes how we feel and what we think about the world. Even though there are millions of songs, there are only two primary types of lyrics: Storytelling and Emotional.

Storytelling lyrics take us on a journey of some kind. It might be a literal journey like “Leaving on a Jet Plane” or “Take Me Home Country Roads;” it might also be a reflective journey through a relationship or memory.

This doesn’t mean emotions aren’t involved, it just means that there is some type of movie that is created in our minds as we listen to song.

Can’t you taste that wine? Don’t you feel like you are on that farm falling in love even if you grew up smack dab in the city? It’s masterful and meaningful storytelling.

Storytelling lyrics are foundational in both classic and modern country music, and that’s why so many of us, including me, became songwriters. We simply love telling and hearing stories.

Country music isn’t the only genre that favors a good story, however. “Someone Like You” (Adele / Daniel Dodd Wilson), “Fast Car” (Tracy Chapman) and “Piano Man” (Billy Joel) are all fantastic storytelling examples.

The other type of lyric you’ll most often see is one centered on emotions. In this type of lyric, songwriters are capturing a feeling or vibe in an interesting way. This isn’t always about a really tight and complex lyric either.

These are the kind of songs that you’ll most often find in movies and commercials because they are the emotional backdrop of what is happening on the screen. The lyrics usually take a back seat to the rest of the song.

This isn’t lesser writing because it’s relatively simple. In fact, writing these types of songs can be incredibly challenging because you have to be interesting and yet vague. You are still getting a compelling image with “hearts that break the night in two” but it’s more like looking at an abstract painting…everyone interprets the meaning differently.

Repetition is a tool often used often in emotional songs. The word “Thunder” or some part of it is used more than 100 times in the pop song by Imagine Dragons “Lightening Then the Thunder.” But, when you listen to it you’ll find yourself bopping your head. It’s catchy.

When acting as an independent music supervisor, I’m often pitched songs that are storytelling songs by writers hoping to get a placement who haven’t considered what makes writing for film/tv different. These songs simply don’t work because they are telling their own story instead of becoming an emotional support to a scene on the screen.

While there is no easy way to write a great song, it is helpful to know which path you will travel lyrically when you begin. It’s also possible to use elements from each type of lyric to elevate your writing.

Until next time, write and rock on friends!

Author Shantell Ogden is an award-winning artist and songwriter whose songs have reached no. 2 hit chart positions in both the U.S. and Europe. Ogden’s songs, known for being lyrically rich with authentic vocals, have also appeared on TV and in feature films. She holds a bachelor’s degree from Berklee College of Music in professional music and is based in Nashville.