I chatted with Maddie Madsen recently, and she was so kind as to answer some of my questions for
Berklee College of Music's alumni blog.  The following is a re-posting of the blog on Berklee Blogs.

In 1989, Maddie Madsen graduated from Berklee College of Music with a major in music synthesis, keyboard programming and sound design. For Madsen, who grew up playing in bands, Berklee gave her the tools to create the sounds she had been using. 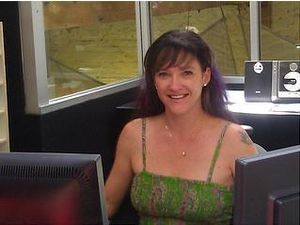 Maddie Madsen '89 at 5 alarm music headquarters in Pasadena, CA
Madsen was raised in Salt Lake City, Utah as the oldest of six children. She knew she was a musician early on, and she convinced her non-musical parents to let her attend Berklee thousands of miles away.

“I had to work hard at Berklee, and it took a lot of determination,” said Madsen. “My major was so specialized that all of my friends from school ended up working in the field so it also was the beginning of a strong network.”

After graduating, Madsen moved to San Francisco to find a job.

“For the first six months I temped because of the computer skills I had gained with music synthesis,” said Madsen. “I taught classes in McDraw and McWord to new computer users.”

“I worked there five years as a studio and office manager, booking the studio and estimating projects for film, commercial and voiceover clients,” she said. “At this time I was also playing in a progressive heavy metal band. We opened up for Dream Theater when they came to town and it was a blast.”

It was during her time at Berke Sound that she first started working with music libraries. Her next opportunity would be more related to her field of study.

“I got a job working at Sound Deluxe as a sound designer assisting a team of five sound designers; I was the only female on the team,” Madsen recalls. “Scott Gershin ran the company and he was a top sound designer. We worked with studios that wanted to turn their movies into video games like Braveheart, Pocohontas, Cliffhanger and Outbreak.”

After working at Sound Deluxe for a year, Madsen was seeking a new challenge. She found it while headed to a weekend camping trip.

“I was going camping and I saw the offices for Associated Production Music (APM),” said Madsen. “I had sent a music license application to them so I decided to stop in and introduce myself in person. I met Cassie Lord, the national sales director at APM. She offered me a job as a music director.”

While at APM, Madsen was hired to produce and write for her first music library album. She also stared playing in a band again.

“In 1999, I left APM to start a film and TV division for Killer Tracks,” she said. “After a year and a half, Cassie and composer Lindsay Tomasic were given the opportunity to start 5 alarm music so I joined them to start the company.”

The early days at 5 alarm were a true test of Madsen’s jack-of-all-trades skillset.

“At 5 alarm, I was an editor, composer and producer,” she said. “Lindsay, Cassie and I did everything ourselves from writing descriptions, to listening to mixes and editing.”

5 alarm launched in June of 2002 and since then it has become one of the largest and most well-respected independent music production companies in the business.

Madsen admitted that her journey has been rewarding, even though it didn’t turn out exactly like she thought it would.

“When I was little I envisioned myself making a living as a composer,” she said.  “I thought I would be in a cabin in the woods near a big city where I could compose and then go into town to rustle up work.”

When asked what values have made her so successful in her music career, Madsen was quick to reply. “Integrity of the art, and integrity in business,” she said. “I know that music has a value and I fight for that. Creating is a gift and you have to stick to the foundations and principles of being an artist. You also have to work hard and learn it all. You don’t have to master it all, but you do have to learn it all.”