Best Americana Album of the Year!!! 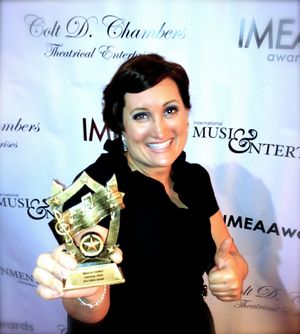 Excitement on the Red Carpet!

Talk about a pinch-me moment!

On October 4, 2014, I received an award for the Best Americana Album of the Year from the International Music and Entertainment Association for my 2013 release Better at Goodbye. The red carpet event and awards ceremony was held at the Paramount Theatre in Ashland Kentucky. The award winners were selected through a combined vote of industry professionals, IMEA members and fans.

I was truly honored and humbled to accept the award on behalf of my album team- Producer John Willis, Vocal Producer Judy Rodman, and all the fabulous writers and musicians that gave their talents to the project. It's definitely a team win!

Click here to see pictures of the awards weekend.