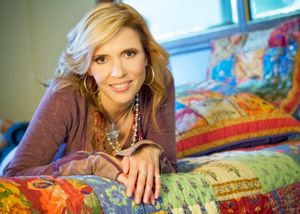 Leslie Ellis is a no-nonsense, level headed, roll-up-your-sleeves kind of person. And what she said this year from the stage at the Tin Pan South songwriter’s festival hit me as just as hard as her tightly crafted tunes.

“Don’t ever give up,” she counseled the songwriters in the room. “Because one day you’ll materialize like a ghost, and people will wonder where you came from.”

And coming from Leslie, that’s not lip service.

When she moved to Nashville in the late 2000’s she came here with a Grammy for award-winning vocals (she sang backgrounds for Celine Dion on “My Heart Will Go On”). She had also had several cuts.

And, even that wasn’t enough to initially open doors for her in Nashville.

“In Nashville there is tremendous competition because there is just such a limited amount of work,” she says. “You have to be ready to get fearless, face the people who seem to see through you and persevere.”

Though she is in-demand as a voice-over artist and back up singer, Leslie attributes her deep love of the writing process and belief in herself that’s kept her working hard in the music biz.

Then Leslie shared even more bits of wisdom for artists and writers:

Leslie says she believes you need “luck, drive and a little bit of crazy to make it.” I’d say she’s got all that and talent to boot!

To learn more about Leslie’s successes and hear her songs, visit her website.